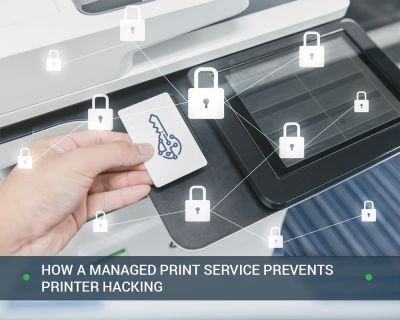 Companies must take precaution when safeguarding data. Doors have locks, Wi-Fi is password protected, but printer security is often largely ignored. To prevent data breaches, a well-managed print service will use a range of tools and policy, to help safeguard data, while fostering a security mindset.

Where are Printers Most Vulnerable?

How Do Hackers Attack Printer Networks?

Hackers can compromise printers in many different ways, to the point that companies are offering big rewards for ethical printer hacking that can allow the company to learn, patch, and gain insight from printer vulnerabilities before the real attackers’ strike.

Most commonly, printers can be used as misdirection for a broader cyberattack, denial of service attacks, disabled for ransom, or be vandalized when left unsecured. Acts of vandalism can include changing the LCD text, strange print jobs, and unauthorized faxes.

Printers can additionally be used as ideal backdoors to inject malware that can send and receive information to workstations. This is accomplished by infecting the printer BIOS (any system with a BIOS can potentially be infected by malware).

What Happens When the Hacker Gains Control?

Famously, City Union Bank and the Bank of Bangladesh were hacked of 81 million dollars when malware was used to affect the Swift banking network,  which subsequently sent inaccurate verification data to network printers, to mask the fraudulent transactions

Another malware attack led to the creation of the Mirai botnet, which infected smart devices to include printers, baby monitors, smoke detectors, and other devices that one would never presume to be hackable. Malware can most easily be prevented by updating printer passwords and keeping the printer firmware updated, which a managed print service professional (IMPS) can assist with.

The Benefits of Managed Print Services

Printers are vulnerable targets and companies must be proactive when safeguarding business assets. Security vulnerabilities can be easily exploited by hackers; however, a well-managed print service will incorporate the security procedure necessary to mitigate risks.