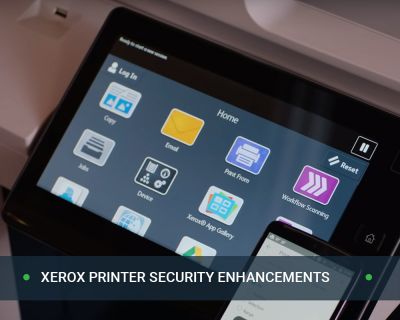 Think printers are inherently secure because they’re not connected to the internet? Think again. Almost every printer has a hard drive and those hard drives can be hacked. However, for Xerox, printer security ranks as the most important element of a printer – this is beyond its ability to, of course, print.

Xerox has a reputation for maintaining stringent security and the tools needed to keep the documents which pass through the printer safe. They’ve recently updated many of the security features on their AltaLink multifunction printers. Read on to discover how much safer documents printed on AltaLink printers have become.

The Xerox Approach to Security

Xerox has long emphasized a four-point, holistic approach to printer and data security. It’s what forms the backbone of every security measure which protects users on whichever Xerox device they use. The four points of this approach are:

It is a robust and comprehensive approach. However, as of April 2019, Xerox has added yet another layer of protection. Specifically, this one involves the AltaLink multifunction printers.

Despite the emphasis on total lockdown of the print environment, hackers have continued to target printers because it’s extremely difficult to bring them under a single, unified cybersecurity policy. Xerox’s latest security upgrade for AltaLink printers seeks to mitigate this.

Embedded control whitelisting technology is an automated cybersecurity response mechanism which detects and responds to threats immediately without waiting for the overarching cybersecurity infrastructure or the IT team to respond. What this means is that more companies can join the three percent of businesses which catch unauthorized access or users instantly.

Xerox uses a whitelisting technique to lock down the print environment. Whitelisting means that only authorized programs or users can access a network. The term stands in contrast to blacklisting, which means that anyone can access a resource except specifically identified users or programs.

Whereas such an approach might cause issues on dynamic systems like computers, this approach works well for fixed-function devices. There exist far fewer applications which will need to be installed on a multifunction printer, and those are already cataloged within the ConnectKey App Gallery. Since ConnectKey builds on these same security principles, users can be at ease knowing that anything they install from the App Gallery is already on the Xerox whitelist.

The extra layer of security is therefore designed to prevent the unauthorized installation of programs – which often take the form of malware. Additionally, Xerox worked with McAfee to develop this technology so that it runs at “root” level, “below” the operating system. On a computer, this would be the same as a piece of malware trying to install itself in the hard drive itself. In other words, anything which tried to bypass ConnectKey or the multifunction printer’s “operating system” and install itself directly on the printer would be blocked immediately.

The new security measure grants several benefits to AltaLink multifunction printer users and the IT professionals charged with maintaining their security. Some of those include:

Hackers are tenacious because printers are a veritable goldmine of data. Embedded control whitelisting technology as a part of printer security is Xerox’s next-generation answer to these increasingly creative attacks.

For Xerox, printer security is a prime directive and the technology giant continues to demonstrate this. With over 25 years of experience, Office Technologies has witnessed the many evolutions of printing technology. We’re excited about this new innovation brought together by Xerox and its security partners. Embedded control whitelisting fills the gaps once and for all to prevent hackers from stealing valuable data.

Own a Xerox AltaLink multifunction printer? Businesses in Pennsylvania trust Office Technologies to keep them up to date with technology and its security. Contact us today to get started taking advantage of this latest evolution of print environment security.